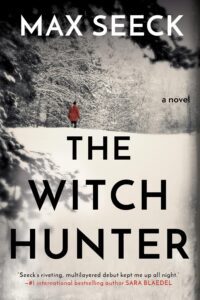 Book 1 of the Jessica Niemi series
by Max Seeck

Translated by Kristian London
Published by Berkley, an imprint of Penguin Random House

Detective Jessica Niemi is thrown into a ghoulish murder investigation: the wife of Finland’s pre-eminent crime writer has been found dead in a scene eerily reminiscent of the author’s Witch Hunter works. Jessica and her colleagues try to divine the motivation behind the killings as other gruesome scenes are re-enacted and the body count mounts. Who is behind the murder spree: a cult, a lone psychopath, or the author himself? And what role does Jessica’s traumatic past play in the investigation – and the killings? Nordic noir gets an injection of the occult in this breakout hit from Finland.

The Witch Hunter made Finnish translation history, debuting at #11 on the NYT Bestseller lists for trade paperback. It is the first book translated directly from Finnish to have made the list. The second book in Jessica Niemi series, “Evil’s Net,” will also be published by Berkley in the US.

“The Witch Hunter, translated with icy precision by Kristian London, is written in short, sharp, present-tense chapters, a technique which adds to its relentless tension. Flashbacks to earlier episodes in Jessica’s life suggest that the strangeness currently unfolding is tied to her personal history. Discovering the how and why of it brings a resolution as bleak as anything Poe might have conjured.”  – The Wall Street Journal.