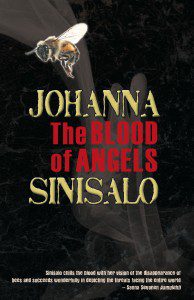 The Blood of Angels

In a near-future Europe, an amateur beekeeper and professional undertaker searches for the cause of the disappearance of his bees, while also struggling to cope with death and grief in his own life. With the help of his son’s animal rights blog, he comes to believe that the bees themselves may lead him to the answers he seeks.

Using her trademark blend of fact and fantasy, Johanna Sinisalo mixes the poetic and polemic to build a moving story of loss and transcendence in the natural world and in our own everyday lives.

Reviews of The Blood of Angels:

“Sinisalo’s novel engages in a fierce discussion of ecological choices while also imagining an unusually picturesque, Orpheus-tinged search for love beyond death.” – Kirkus

“Stunning prose takes the reader down a twisting path between gritty eco­terrorism and another world, with winged messengers leading the way.” – Library Journal (*starred review)

“Sinisalo juxtaposes one man’s personal grief with impending ecological disaster in this compelling and intimate rumination on animal rights, world food supply, and the indispensable role of bees to our environment. ” – Booklist (*starred review)

“At a time when much of science fiction has been criticized for being bland, uncommitted or retrospective, Johanna Sinisalo’s The Blood of Angels is a raw, gritty, angry book that is actually about something… I passionately admire this book” – Strange Horizons

One Response to "The Blood of Angels"