(Yes, this video is absolutely spot on. I have the emails to prove it! Originally shared by No Peanuts for Translators!)

Working as a translator affords me a lot of freedom to pursue other interests. One of my primary avocations is rock climbing and alpinism. So I do a lot of objectively dangerous things. What I don’t do, however, is climb or work without a lifeline. In climbing, my lifeline is a dynamic nylon rope that can easily lift an automobile. In translating, my lifeline is my contract.

Here at FELT, we’ve all experienced a wide variety of contract conditions for our work, from (virtual) handshakes to elaborate written contracts signed, countersigned, and snail-mailed across continents. We’ve also seen the consequences of various approaches to contracts, positive and negative. I’ve personally translated a book with no contract and had it go on to see many reprintings. If I only had a nickel for every copy of that book sold…

You only have to make a mistake like that once.

Which is ultimately the purpose of contracts: to minimize regrets for all parties and ensure successful projects. In most circumstances literary translation clients have good intentions, follow best practices, and remain solvent. The translator delivers a good translation, the translation is edited and published, and the translator is paid reasonably for his or her time. But there are other circumstances. Publishers’ schedules are unexpectedly delayed. Disputes arise over expectations. Translators experience health problems. What started out as a niche long-shot turns into a best seller. On rare occasions, publishers fail and go into bankruptcy.

Translators, especially literary translators, greatly underestimate the value of their own work, making the specter of low wages a self-fulfilling fear and stoking the cult of poverty. But it’s understandable. How is an inexperienced translator to know what prevailing rates or standard contract terms are?

Fortunately there are some resources, to which I’ll add my own experiences. 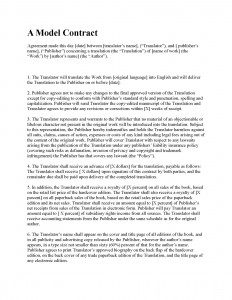 PEN America offers a model contract for literary translators. This is a great starting point for negotiating a contract with a publisher and serves to point out the main concerns a translator should have.

In contract negotiations, I focus on three areas: total compensation, timelines, and best-seller contingencies. There are other important concerns (see the PEN contract above), but those tend to be less difficult to agree on with most publishers.

The total compensation you receive as a translator is up to you. If you have the skills to successfully translate literature (or anything else), you have the skills to make a good living for yourself. But here is the key: that good living may not come from the project in front of you right now. Forgetting the concept of opportunity cost is the primary reason literary translators tend to be underpaid. Yes, you could accept the (dubious) honor of translating this particular book for peanuts, but you could also reject it and go find work translating technical documents and writing advertising copy and make 100 EUR an hour (depending on your languages, of course, but you get the point–you’re smart and you have options*). Yes, you may be an artist, but are you also a monkey?

One hundred euro an hour for literary translation isn’t anywhere close to reasonable in most cases, but what is reasonable is usually higher than translators assume. See below for more discussion of rates. The bottom line though is that it’s OK to say no, and if others are going to be making money on a project, you should too. You aren’t damaging Literature and Art by turning down a job. You aren’t spitting on the graves of the great writers of the past or the shoes of those in the present. Actually, what you’re doing is helping literary translation by providing publishers with information–information about what books are worth translating and information about the value of translation. If a publisher can’t pay a living wage for the translation of a book, perhaps they should rethink their business model, the books they are selecting, or the markets they are targeting. I can’t speak for all markets, but I know from seeing my own sales figures that even in the US, one of the worst markets for literary translation, there is plenty of money to be made for everyone if publishers make wise choices. How do you think editors get paid?

While it is true that many books bring publishers little or no money (publishers will often bemoan this while trying to convince you to take a low rate), the books that are successful support the overall enterprise, which is true of every other industry everywhere. Consider the contradiction: if a client wishes to tie your fees to the success of the book, why aren’t they offering to give you significant royalties, which is the only way to do that? The answer is simple: this is a negotiation tactic, not how the industry actually works. Do you think the crew and cast of a motion picture don’t get paid if the film flops? Of course they do. Everyone on a fee contract receives their compensation as normal, those who receive royalties make less than they hoped, and the studio takes a loss this time which is balanced out by their successes other times. To reiterate: publishing is a business and translators are just as entitled as anyone else involved to receive fair pay and a portion of the success or failure of their creative contributions.

Timelines are another key point of negotiation for any contract. Stipulating enough time to do a good job is critical (and a sign of professionalism), as is outlining when you will be paid. Standard practice is an advance of 1/2 of the total fee upon signature of the translation contract and 1/2 upon completion and delivery of the translation. Defining exactly when the translation is complete is important since publisher production processes can be unpredictable. A good rule-of-thumb maximum is 60 days from when you deliver the translation for editing. That gives you and the publisher plenty of time to perform edits and review but if something goes wrong you can still pay your rent. Most publishers pay earlier than this, within about 30 days even if final editing is not quite complete. I’ve also seen models with payments divided into thirds with 1/3 at signing, 1/3 at delivery, and 1/3 at completion of editing. The important thing is just to make sure you can live while you translate and that the date for final payment is not open-ended. For example, payment “upon publication” could easily mean you don’t get paid for a year if the publisher decides the book doesn’t fit with this year’s catalog.

Stipulating some sort of protection against a runaway hit has become standard for literary translators. I don’t know anyone who doesn’t insist upon this in some form or another. Sometimes we call it the Stieg Larsson Clause. (Luckily that translator did have the good sense to request royalties!). This clause can take many forms:

Under all of these models, definitions are extremely important. Currently we focus on print, ebook, and audiobook copies, but a good contract will have a clause broadly stipulating that it applies to books sold in any format current or yet to be invented. I never sign contracts that ignore non-print forms of distribution. You might be surprised how fast royalties on ebooks even sold at discount prices can add up.

In negotiating the Stieg Larsson Clause, the important thing is to remind the publisher that the cost to them is negligible. For yourself, remember that this is the way creative people in entertainment industries are almost always paid. Authors, illustrators, musicians, film makers, agents…why would literary translators be any different? Unless you don’t view your work as a creative endeavor, in which case, why aren’t you translating medical documents for three times more money?

The Translators’ Association of the UK Society of Authors publishes a “seen in the wild” rate, currently 90 GBP per 1000 words. Note that the application of this rate to the number of words in the source foreign language text or the target text of the final translation can make a great deal of difference in the final sum. At FELT we’ve seen both approaches. The important thing is 1) to be clear about which standard will be applied and 2) to make sure the final compensation is commensurate with the work involved. Paying per target word goes back to Dickens and beyond, but if your client wants certainty about the final cost up front, the math is simple to convert a target rate to a source rate. For Finnish and English, the ratio is about 1.35 English words per Finnish word, but character counts are usually almost identical.

Other translation associations may also provide members with survey data about rates members receive. The Finnish Association of Translators and Interpreters, to which I belong, is one such example. Beginning translators would do well to join their national translation associations and request the guidance of other member translators. Otherwise they are likely to contribute to driving rates down for everyone.

These sources of information are a starting point. I personally sometimes accept less than the rate data the associations listed above collect, and I also frequently receive more. Overall my experience with clients in Finland, the UK, and the US is in line with the rate listed above. I generally attempt to pace my work so these rates work out to around 35-45 EUR an hour, which is only slightly higher than I pay semi-skilled craftsmen with no university education to perform repairs on my house. I pay plumbers and electricians significantly more. Remember, as a self-employed person I am responsible for all of my own taxes, insurance, and benefits, so in terms of net pay any nominal rate works out to be considerably less in terms of a salaried employee’s hourly wage. How much you make charging prevailing rates will depend heavily on how fast you work.

Understanding the inner workings of the publishing industry is often difficult for translators, whose backgrounds tend to emphasize linguistics and literature rather than business. Much literary translation is not terribly profitable and relies on grants and subsidies. Literary translators should be sensitive to this, and negotiations between translators and publishers should take these realities into account. But those considerations, while real, should not be overblown and are not more important than the value of translators’ time and dignity. 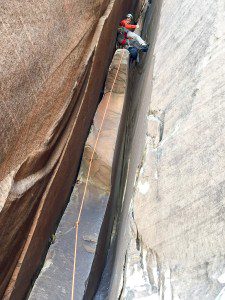 I deeply respect and value my clients and institutional benefactors, and the vast majority of the people I’ve worked with in the publishing  industry have been honest and well intentioned. Good contracts have been the proverbial fences that allow us to remain good neighbors and sometimes even become friends whilst doing difficult, under-appreciated work about which we all feel passionately. Climbing roped-up is a thrill, and translating with a fair, secure contract is a pleasure and a privilege.

*I really believe this. I’ve interacted with dozens of literary translators, and they’re all bright, competent people with great prospects wherever they live. Options for translators include translating other types of texts (check out Proz.com), writing, editing, teaching, running translation agencies, publishing, arts administration, or going back to school for more training. In addition to translating, I’m also a rock climbing instructor and PhD candidate in public administration. Being a self-employed, freelance contractor is hard to beat!

One Response to "On Contracts: Unsolicited Advice for Literary Translators"