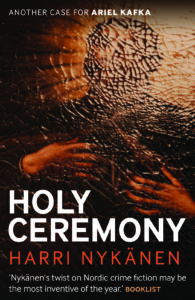 In the third book in the popular Ariel Kafka series of crime novels, a woman’s body scrawled with religious texts is found in a Helsinki apartment. The eerie crime is assigned to one of only two Jewish police officers on the force, Inspector Ariel Kafka, and the peculiarities continue to mount. For starters, the medical examiner recognizes the victim, because he saw her body in the morgue the day before. Kafka’s investigation of religious fanatics turns into a hunt for a perpetrator who is more damaged than dangerous, the victim of institutionally countenanced pedophilia at a boarding school, as Kafka follows a decades-long trail of crimes leading to the enigmatic Brotherhood of the Holy Vault.
Like all Harri Nykänen’s works, Holy Ceremony is a brisk read, with rapid twists and turns leading to a satisfying resolution. Kafka’s dry humor is once again in evidence, as is his appealing and relatable melancholy. For fans of intelligent crime stories.

This Scandinavian noir is a multi-layered story with exciting drama and an unexpected ending. Nykanen creates cinematic scenes that pull the reader into his world.- Seattle Book Review

Intricate in its layers upon layers of corruption, murder, suspect cops and public officials, and seriously dirty secrets.- Kirkus Reviews