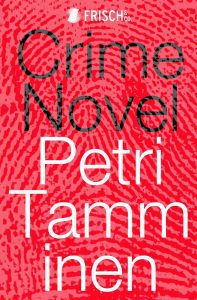 by Petri Tamminen
translated from the Finnish by Kristian London
Published by Frisch & Co.

“Trust me friends, this one is anything but your standard game of cat and mouse. . . a compelling and beguiling experience.” —Aaron Westerman, The Typographical Era

Commissioner Vehmas is on the trail of an unusual criminal. Hermann Ångström, aka the Hämeenlinna humiliator, subjects his victims to unbearable embarrassments. He leaves a young bride at the altar, disguises himself as a doctor and delivers false medical reports, sends a government official into a downward spiral of depression—it’s a veritable plague of shame. Can the commissioner stop him before he strikes again?

A blackly comic suspense story, Petri Tamminen’s Crime Novel is a delightfully melancholic parody from one of Finland’s greats.