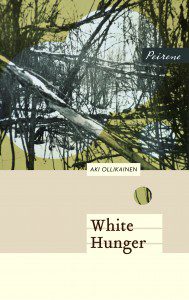 A historical novella set in nineteenth-century Finland, White Hunger is a bleak tale about hunger and the human will to survive. The style is tersely compelling, the imagery fantastically striking. The shifting perspectives give an edgy restlessness to the work, and heighten its emotional power, bringing home the intensity of individuals’ experiences. At the same time, the book hints at broader political and historical shifts and probes ethical questions regarding our responsibility to others.

What does it take to survive? This is the question posed by the extraordinary Finnish novella that has taken the Nordic literary scene by storm.  1867: a year of devastating famine in Finland. Marja, a farmer’s wife from the north, sets off on foot through the snow with her two young children. Their goal: St Petersburg, where people say there is bread. Others are also heading south, just as desperate to survive. Ruuni, a boy she meets, seems trustworthy. But can anyone really help?

‘Like Cormac McCarthy’s The Road, this apocalyptic story deals with the human will to survive. And let me be honest: There will come a point in this book where you can take no more of the snow-covered desolation. But then the first rays of spring sun appear and our belief in the human spirit revives. A stunning tale.’ Meike Ziervogel, Peirene Press

Emily on translating White Hunger:
White Hunger is a spare, bleak book; I saw it as my task to preserve the pared-down quality of the narration, allowing the story that unfolds to emerge with full and devastating force. The imagery – which is both lovely and disturbing – had to come across with the same terrible power. One of the features of the text I most admire is its handling of point of view; the narrative enters the heads of its characters, so that the fates that befall them hit home hard. I wanted to do justice to the narrative voice especially at moments when the reader can hardly bear to be party to what is going on, but cannot look away. The political and ethical power of the book is bound up with its aesthetic: compassionate, unblinking, unsparing,

Fleur on translating White Hunger:
Working on the text, I was struck by both the beauty of the language and the terror contained in the imagery, which is stunningly apt and original: not florid or decorative, but integral to this narrative of hunger, cold and misery. The book is set in 1860s Finland, which has been struck by famine, but despite being rooted in history, it has a timeless quality in its handling of questions of morality: it shows the kindness of ordinary people, the hard-heartedness of others, the influence of politics and class. I was deeply moved by the book and impressed by its economy. The hope it offers towards the end is measured and hard-won, in no way offering a facile redemption.