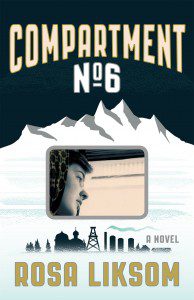 A quiet young Finnish student is forced to share her train compartment with a drunken, tale-telling, self-proclaimed murderer as they cross the crumbling Soviet Union from Moscow to Ulan Bator.

Drenched in sensual detail, carried along by the balladic rhythm of the rails, and punctuated with glimpses of the absurd, surreal, and horrible, Compartment No. 6 is an ambivalent love song to a dying superpower.

Winner of the 2011 Finlandia Prize and the English Pen Award.

Reviews of Compartment No. 6:

“Compartment No. 6” unfolds like a poem, or maybe a fable: a mysterious journey by rail across Russia from Moscow to Mongolia over a snow-swept 1980s landscape… the book depicts a fantastical vision of a populace somehow muddling through a world where every engine repeatedly breaks down.” – Minneapolis Star-Tribune

“Ms. Liksom conjures beauty from the ugliest of things. As she finds something wily and comical in the unforgettably horrible Ivanov, so she imbues the industrial wastelands with an inexplicable charm. . . . What emerges is a twilight-hued elegy to the sickly last days of a wicked empire.” – The Wall Street Journal 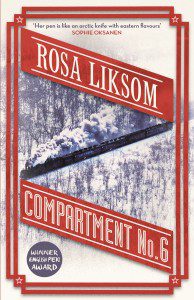 “Liksom catalogues the Soviet Union, using her extraordinary prose to gather the details of an entire nation… Each word is precise, a note on a piano played well, and when strung together, they make the Soviet Union as real and complex as it is. ” – Grist

“[Compartment No. 6] seeks to bury Mother Russia and to praise her. It’s a delicate trick, but one that Finnish author Rosa Liksom pulls off with subtlety and skill.”—Washington Independent Review of Books

One Response to "Compartment No. 6"