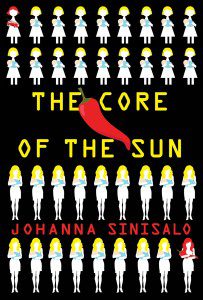 The Core of the Sun

by Johanna Sinisalo
translated from the Finnish by Lola Rogers
January 2016, from Grove/Atlantic

In Johanna Sinisalo’s alternative universe, Finland is a nanny state run amock, where prohibition was never repealed, the theories of the eugenics movement were never renounced, and alcohol and all sorts of other substances are completely banned – including chili peppers, due to their possible mind-altering and addictive properties. The heroes of the novel are Vanna, an undesirably intelligent woman who wears an empty-headed pose to stay out of the clutches of the Health Authority, and Jare, an illicit chili pepper dealer who recruits her as his assistant and helps her to search for her lost sister.

This newest novel by the internationally acclaimed author of Troll: A Love Story and The Blood of Angels is audacious satire, with a numinous soul at its core.

Reviews of Core of the Sun:

“Like the best dystopias, The Core of the Sun recasts a familiar concept into a slightly different world, in order to highlight exactly how strange our everyday beliefs are. It’s the best dystopian fiction I’ve read in a very long while.” – Paul Constant, Seattle Review of Books

“Clever and comical… it’s a thing we rarely behold in America: a feminist novel that propels you forward to its terrifying, pulpy conclusion.” – Flavorwire

“Sinisalo crafts a funny, unsettling, emotionally charged apparition of the present that’s all her own.” – Jason Heller, NPR

” A testament to the power of the human soul to escape oppression and a smirking social commentary, The Core of the Sun is one deliciously spicy package.” – Shelf Awareness (starred review)

Winner of the 2017 Prometheus Award.