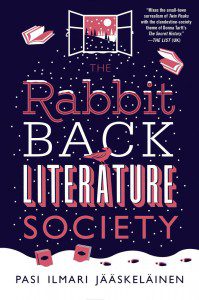 The Rabbit Back Literature Society

by Pasi Ilmari Jääskeläinen
translated from the Finnish by Lola Rogers
published by Pushkin Press, UK; Thomas Dunne, US.

by the author of Secret Passages in a Hillside Town

Only very special people are chosen by children’s author and local hero Laura White to join the Literature Society, an elite group of would-be writers in the small town of Rabbit Back. Now Ella, a local substitute teacher, has been invited to join, making her the first new member in decades.

As Ella learns the traditions of the Society, and its mysterious ritual, ‘The Game’, disturbing secrets come to light. In a series of frightening and funny encounters, Ella learns that becoming a writer in Rabbit Back is not quite what she thought it was.

Reviews of The Rabbit Back Literature Society:

“This wonderfully knotty novel… is a peculiar metafiction, a very grown-up fantasy masquerading as quirky fable. Unexpected, thrilling and absurd, it is primarily an irreverent exploration of the art of writing itself” – Daily Telegraph

“Gripping until the last page… Scandinavian literature fans should prepare to be amazed.” – Sunday Mail Glasgow

“The Rabbit Back Literature Society is a lobster-pot of a book. It lures you in with an irresistibly quirky, witty opening and a huge Big Idea… It pays off, mostly due to an exquisite balance of suspense, precision-engineered structure and darkly playful humour… a unique vein of fantasy-realism unlike anything else you’ve ever read.” – SFX Magazine

“It’s hard to convey the peculiar atmosphere of this novel – absurd but believable, sinister but enjoyable, beautiful but disquieting. This is Jaaskerlainen’s first novel to be published in English (and hats off to Lola Rogers for an elegant, literary and readable translation). Let’s hope there are more to come” – The Independent

“The star turn of this novel is the town of Rabbit Back itself… it’s a place where the borders between reality and fiction seem disconcertingly porous. Superbly written (and admirably translated by Lola M Rogers) and taking risks that in less skilful hands would not pay off, this exploration of the act of storytelling is as chilling as it is beguiling.” – Booktrust

Available from Pushkin Press, Macmillan, or your favorite bookseller.