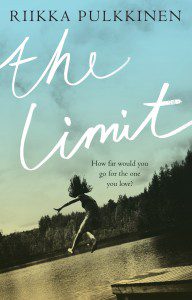 By the author of True

Riikka Pulkkinen’s first novel, written when she was just 26 years old, is the remarkably perceptive story of ordinary people testing, and being tested by, the limits placed upon them.

Anja is a literature professor struggling to keep a difficult promise to her husband at the end of his life. Her student Julian, who teaches high school, trespasses sexual boundaries with Mari, a girl in his literature class. Mari, the troubled 16-year-old at the center of the story, finds herself experimenting with transgressive, self-destructive behaviors until an accident allows her to break through her limitations in heroic ways and see herself in a new light.

In The Limit, Pulkkinen displays her signature ability to fuse the philosophical and personal into a story that is both thoughtful and moving, culminating in a suspenseful and emotionally cathartic resolution.

Available in Australia and the UK from Scribe Publications, and in the North America from Amazon.com.

“In a quiet, mature novel…Pulkkinen explores the limits of people’s control over their own actions and circumstances, and the boundaries of acceptable behaviour.” Sydney Morning Herald

“The author made quite a splash in her native Finland with this novel and it’s easy to see why – each of its stories is strong, each protagonist very well-drawn, the writing is unshowy but careful and sensitive, and there’s the kind of tension that you can only get from a heartfelt Scandinavian novel whose stated themes are desire and death.” The Daily Mail

“There is a sparse lyricism to Pulkkinen’s writing that makes her storytelling truly beautiful.” The Hoopla.