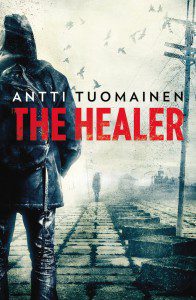 by Antti Tuomainen
translated from the Finnish by Lola Rogers
published by Vintage, UK; Henry Holt, US

The Healer is both a crime novel and a work of science fiction, set in a Helsinki of the near future filled with endless rain, squatters and refugees, crumbling roads and power systems, and scant public services.

Tapani Lehtinen, a poet who hasn’t published in years, moves through the city frantically searching for his wife Johanna, whom he hasn’t heard from in nearly 24 hours.

Johanna is a journalist investigating a series of brutal murders of wealthy polluters in what remains of Helsinki’s privately guarded upper-class neighborhoods.

With stakes that couldn’t be higher and betrayals both personal and global, The Healer is a novel that asks us what we have to hold onto when the world is falling apart.

Available from numerous vendors through Random House and Henry Holt, or at your neighborhood bookstore.

“The murders and their culprit take a backseat in this fraught thriller as Tuomainen conjures up in spare, softly poetic prose the collapse of social order and human decency in the face of environmental havoc.” – Metro UK

“It’s no accident that Antti Tuomainen’s protagonist is a poet. As rendered in this sensitive translation from the Finnish by Lola Rogers, the book’s language is as important as the tension generated by the narrative.” – Barry Forshaw, The Independent

“This dystopian tale snagged the Clue Award for best Finnish crime novel of 2011, and U.S. audiences should prepare to be every bit as enthralled as the Finns… Readers attracted either to dystopian fiction or to Scandinavian crime will find gold here.“ – Christine Tran, Booklist (starred review)

“As a crime story, set in a society torn asunder by climate change, it’s an intriguing read. But what makes it so haunting, on top of that, is Antti Tuomainen’s poetic rendering of the city…” – Crime Fiction Lover

“The Healer is a fantastic introduction to a promising new name in Scandinavian Crime.” – Kate Wilson, Booktrust

Winner of the Clue Award for best Finnish crime fiction.