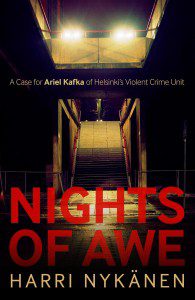 During the Days of Awe that lead up to Yom Kippur, detective Ariel Kafka – first a policeman, second a Finn, and only third a Jew – is confronted with a particularly grisly case. The corpses of two Arabs, one horribly mutilated, are found in Finland’s sleepy capital. Shortly thereafter, Kafka discovers two more bodies at an Iraqi-owned garage. Are the deaths related, and are they evidence of a personal grudge, gang warfare, or international terrorism?

When it turns out that Helsinki’s small Jewish congregation is expecting an unofficial visit from the Israeli Foreign Minister, the case takes on political tones. Kafka learns hard lessons in diplomacy as he tangles with fellow congregants, the Finnish Security Police, and Mossad, following a trail that unexpectedly leads back to his youth.

Acclaim for Nights of Awe:

“A cool debut for Kafka, with the promise of more to come.” –Time Out

“…an interesting plot told in an entertaining, straight-forward style by a welcome new voice.”  –Literary Review

“Kafka is an appealing detective: a non-observant 40-something Jewish bachelor who is such a stubborn, dedicated policeman that he’s willing to risk his career to get an answer…Here’s hoping Bitter Lemon Press publishes the remaining books in the series.”   –The Reporter