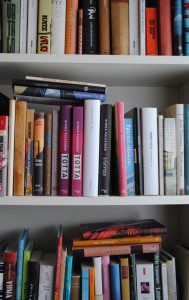 We members of the Finnish-English Literary Translation Cooperative are in the enviable position of being part of a growing field. Interest in Finnish literature has been slowly but steadily increasing in the English-speaking world, and as avid readers of Finnish literature we’re aware that there are scores of wonderful Finnish books not yet translated into English, and more published every year.

The number of works of Finnish literature published in English is perhaps too small to make any firm claims about statistical trends, but it seems to be experiencing a tiny but definite boom. From 1992-2002, there were fewer than 20 English translations of Finnish novels published abroad. From 2002 to 2012, there were at least 34. This increase is due largely to the new availability of qualified translators.

All of the members of the FELT Cooperative have been participants in training events organized by FILI Finnish Literature Exchange, an office funded by the Finnish Ministry of Education and Culture. FILI was founded in 1977 to promote Finnish literature abroad, and has for the past several years offered translators training seminars, internships, and grants for work and travel. That is how many of us first met. Due to FILI’s translator training and sponsored publishers’ events, an increase in global communication and translation generally, and the global Nordic crime craze, the number of Finnish books published abroad is steadily growing.

There are many roads to becoming a literary translator, but ideally a person first learns their own language and literature thoroughly and learns to write well, then gains a knowledge of a second language and culture well enough to absorb and re-express it eloquently and effectively. In the case of native English speakers learning a language as distinct and complex as Finnish while simultaneously maintaining a knowledge of English-language culture both high and low, the process of learning can take a very long time.  After four years of studying Spanish, I confidently translated poems for a small literary magazine, but I didn’t publish a translation from Finnish into English until ten years after I began studying the language, and felt myself a complete beginner at that stage. It takes many years and a lot of practice to be a good Finnish to English literary translator.

The particular challenges of the task have meant that for decades – always, in fact – there were very few translators qualified to translate literature from Finnish into English. Until quite recently, there were only about half a dozen Finnish to English literary translators on the entire planet, some of them non-native English speakers, most working only sporadically. Decades of the 20th century went by without a single literary translator working directly from Finnish into native English. Thus many works of Finnish literature were translated through an intermediary language such as Swedish or German, a practice that continued even into this century. Others were translated by native Finnish speakers for whom English was a second language, with or without adequate English-language editing. With the exception of Mika Waltari’s international bestsellers of the 1950s (themselves translated through an intermediary language), the selection of Finnish literature in English has been very limited and sparsely distributed.

Luckily, the situation is changing. There is now a group of qualified Finnish to English literary translators who have had an opportunity to devote sufficient time and practice to perfecting their craft. The work of these newly trained translators accounts for most of the increase in Finnish novels published in English over the past decade. The modest but significant proliferation of skilled translations of Finnish literature has served to increase interest in Finnish books and confidence in the availability of competent translators. This grants us the luxury of enthusiastically promoting each other’s work, safe in the knowledge that the more Finnish literature is made available in English the more demand there will be, at least for the foreseeable future.

Finland is a small, fascinating country whose influence in many spheres has been out of proportion to its size. Sadly, this has not been the case with Finland’s literature. Due to historic and linguistic circumstances, Finnish literature has received less attention in the English-speaking world than it merits. We aim to change this, and our tiny translation boom has thus far shown no sign of flagging. The opportunity to give Finland’s literature the international audience it deserves has been our good fortune, and, we hope, good for the rest of the world as well.