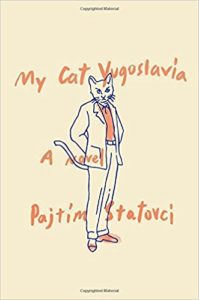 “A love story set in two countries and in two radically different moments in time, bringing together a young man, his mother, a boa constrictor, and one capricious cat.

In 1980s Yugoslavia, a young Muslim girl is married off to a man she hardly knows, and what was meant to be a happy match quickly goes wrong. Shortly thereafter, the country is torn apart by war and she and her family flee to Finland, where her son Bekim grows up to become a social outcast—not just an immigrant in a country suspicious of foreigners but also a gay man in an unaccepting society. Aside from casual hookups, his only companion is a boa constrictor that, improbably (he is terrified of snakes), he lets roam around his apartment.

Then one night, at a gay bar, Bekim meets a talking cat, who also moves in with him. It is this witty, charming, manipulative creature who starts Bekim on a journey back to Kosovo to confront his demons and make sense of the magical, cruel, incredible history of his family. And this, in turn, enables Bekim finally to open himself to true love—which he will find in the most unexpected place.”

Praise for My Cat Yugoslavia:

“This beautiful novel is about a great many things: a snake and a sexy, sadistic, talking cat; online cruising and Balkan weddings; the surreal mess of identity; the things that change when we change our country and the things that never change; the heartbreaking antagonism between fathers and sons; the bewilderment of love. Pajtim Statovci is a writer of brilliant originality and power, and his debut novel conveys as few books can what life feels like now.”
—Garth Greenwell, author of What Belongs to You

“Powerful. . . . Dramatic. . . . Statovci is a tremendous talent. This debut novel—a deserved winner of the Helsingin Sanomat Literature Prize for Best First Novel in 2014—has an intensity and power that demands a second reading.”
—Library Journal (Starred)

“Who would have guessed that an award for the best first novel written in Finnish would go to a book that features a talking cat, a pet boa constrictor, an Albanian arranged marriage, and a lonely gay immigrant? […]This dark debut has a daring, irrepressible spirit.”
—Ann Hulbert, The Atlantic

“’My Cat Yugoslavia’ is a marvel, a remarkable achievement, and a world apart from anything you are likely to read this year.”
—Téa Obreht, The New York Times