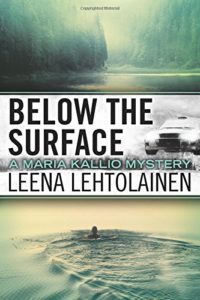 When a woman’s body turns up in a lake—a bullet to the back of her head—Violent Crime Unit commander Maria Kallio, freshly back from maternity leave, is fast to get on the case. The victim is ID’d as Annukka Hackman, wife of a prominent publisher and author of an upcoming unauthorized tell-all book on Sasha Smeds, Finland’s celebrated racing rally driver.

Almost as soon as the inquiry starts, it goes off the rails, as those connected to Annukka—and to Smeds—seem to have more secrets than they have alibis. Was the journalist about to reveal a bombshell that someone was desperate to keep quiet? Or will it take some reading between the lines? The clues may be few, but the list of suspects is long. As she struggles to balance her home life, run a department tainted by career-threatening allegations, and catch a killer, Maria is shocked to find just what someone was willing to do in the name of love…or revenge.

Also in the Maria Kallio series: