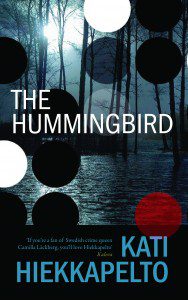 Anna Fekete, who fled the Yugoslavian wars as a child, has a past. Just beginning her career as a criminal investigator in a northern Finnish coastal town, she is thrust into a high-profile, seemingly unsolvable case that has riveted the nation. It doesn’t help that her middle-aged new partner, Esko, doesn’t bother hiding his racist prejudices, and Anna becomes the target of a systematic campaign to unsettle her. A young woman has been killed on a running trail, and a pendant depicting an Aztec god has been found in her possession. Another murder soon follows. All signs point to a serial killer, but can Anna catch the Hummingbird before he – or she – strikes again? And at what personal cost? Dark, gritty and filled with contemporary themes, this is a chilling, unforgettable book that you will find impossible to put down. Or forget.

SHORTLISTED FOR THE PETRONA AWARD 2015

Praise for The Hummingbird:

“There’s a rawness to the writing that comes from an author willing to take risks with their work.” – Sarah Ward, CrimePieces

“For a first novel The Hummingbird delivers a lot. The perspectives on immigration feel genuine and are insightful and the writing is atmospheric and absorbing.” – Live Many Lives

“Hiekkapelto provides an unsentimental account of Finnish society and its cultural traditions, in particular the Finnish obsession with hunting and guns […]” – Declan Burke, The Irish Times

“This is also a book which is unafraid to tackle social issues such as immigration and drug culture in contemporary Finnish society. [Hiekkapelto] has a wonderful natural style and narrative flow, as well as a talent for creating memorable, intriguing characters.” – Crime Fiction Lover