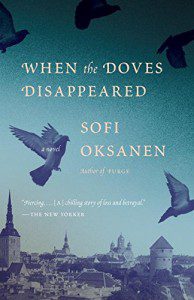 When the Doves Disappeared

by Sofi Oksanen
translated from the Finnish by Lola Rogers
published by Knopf, US; Anansi, Canada; Atlantic, UK.

The third book in Sofi Oksanen’s acclaimed Estonia-Finland quartet, When the Doves Disappeared is a story of occupation, resistance, and collaboration. The novel follows the experiences of three characters living through decades of Nazi and Soviet occupation.

Roland is a principled Estonian independence fighter desperate to document and avenge the wrongs done to his country. His cousin Edgar is an opportunist who will stop at nothing to hide his secrets. Edgar’s wife Juudit, trapped in an unhappy marriage, falls in love with a German officer and stumbles into heroism through her bond with the idealistic Roland. The verging and merging of these three lives form a story of deception, suspense, and courage.

Like Purge, Oksanen’s previous international bestseller, When the Doves Disappeared is a vivid and gripping story of the best and worst that people can become when they live in impossible times.

Reviews of When the Doves Disappeared:

“A piercing look at characters striving to retain their humanity amid fear, violence, and secrecy.” – The New Yorker

“The fragmented narrative, adeptly translated by Rogers, switches between the Third Reich and the height of Soviet power, using these two time periods to make ideal use of dramatic irony.” – Publishers Weekly (*starred review) 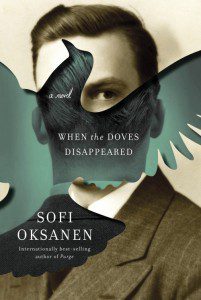 “When the Doves Disappeared… winds the tension to astonishing levels.” – Toronto Star

“This is powerful fiction that stirs history, war crimes, and psychology into a compelling mix.” –  Booklist

“A brave and important voice from the ex-communist world… Betrayal, secrecy and memory are the haunting themes of Sofi Oksanen’s accomplished new novel.” – The Economist

“Great thriller about a part of the world not well-known to Western readers. Sofi Oksanen is a writer to watch.” – The Globe and Mail 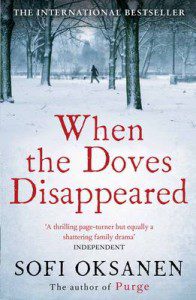 Shortlisted for the Oxford-Weidenfeld Prize for translation.

Named a Best Book of 2015 by the Telegraph and the Globe and Mail.

One of the Independent‘s 14 Best Translations of 2015.

One Response to "When the Doves Disappeared"