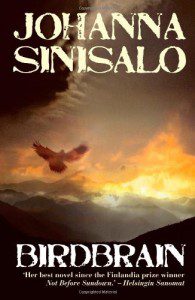 Sinisalo’s fifth novel, the eco-thriller Birdbrain is a compelling exploration of the desire of tourists to conquer the world’s last remaining pristine landscapes. A young Finnish couple set off on the hiking trip of a lifetime in Australia, Tasmania and New Zealand with Conrad’s Heart of Darkness in their backpacks and the intention of being ecologically aware. As they attempt increasingly challenging trails, their trek takes a sinister turn as unsettling incidents start to occur. Belongings disappear and – more mysteriously – reappear. Gradually the trekkers sense that, rather than these being simply random events, they are now at the mercy of untamed natural forces directed by an intelligent being. The novel reveals the darker side of the explorer’s desire: the insatiable need to control one’s environment, to invade and to leave one’s mark on the landscape. But what happens when nature starts to fight back?

“Birdbrain is a graphic examination of two very different people and a harrowing allegory of humankind’s problematic relationship with the planet.” – Eric Brown, The Guardian

“Birdbrain is very obviously and forcefully an environmentalist novel; but it is also simply a brilliant piece of writing about the environment. […] That the corruption of humanity may have produced a corruption in the ecology of this land, even a counteracting one, is a deeply felt tragedy – one that springs from a bleak and partial view of humanity, but one that provides a rich seam for this elegant, severe novel to mine.” – Niall Harrison, Torque Control